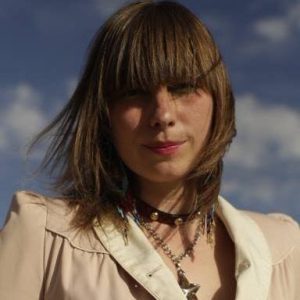 Currently living in the beautiful small village of Joshua Tree, CA. The death place of Graham Parsons and birth place of many artistic visions! Just a couple hours away from Los Angeles, Annachristie has been writing and recording her newest EP “Sibling Rivalry” while soaking up the mountain views.

She was born outside of Philadelphia, PA in a suburb called Downingtown some might know as home of the blob diner. Annachristie grew up in a two bedroom red brick house with 7 home-schooled siblings, ironically just a couple blocks away from an elementary school. As the kids would walk home from school, she and her brothers and sisters would sing songs, do cartwheels, ballet and try to sell toys to the other kids. Her father Dennis Sadler (founder of Songwriter’s Conspiracy) supported all 8 children as an antique dealer. Annachristie followed in his footsteps in the trade of buying and selling in order to dedicate more time to her real passion, music.

Annachristie is musically emerging from a life long project with her sisters, Sisters3 who successfully released “Coruscate at the Meadow Gate” (2012 NYC release recorded at The Cutting Room) under Modern Vintage Recordings. They also recorded “Star Spangled” (2009) in Hamilton, Ontario, Canada in the same church Feist had recorded her early albums.

The latest, light-hearted release “Sibling Rivalry” will be her fourth release to date and her first solo release since her premiere album “Elixer for the Human Heart” (2005). Currently, she is in the thick of booking a release tour both in the USA, as well as in Europe.

She has shared the stage with artists such as Amos Lee, First Aid-Kit, Langhorn Slim, and Hoots and Hellmouth. As luck or hard work would have it. Annachristie and Sisters3 sang all the backup vocals for Sharon Little on her tour with Alison Krauss and Robert Plant. She has made appearances on Mountain Stage, NBC Ten Show, Good Morning New York, Philadelphia Folk Festival and Bliss Fest.

She is as hard working as a donkey and as magical as a unicorn.

Annachristie has had a long romance singing in the subways of NYC sharing her music with the transient city traveling relentlessly with a vigor for adventure that you can taste when she sings. She is a true minstrel looking to sing you a song on the way, a siren luring you to look at the ocean.

Will you come along?