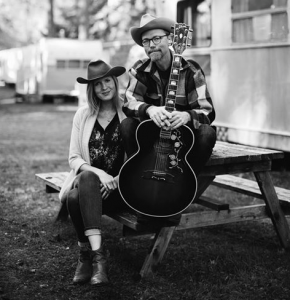 The Earnest Lovers are vintage honky tonk heartbreak serenaders Pete Krebs (Hazel, Stolen Sweets, Portland Playboys) and Leslie Beia (Copper & Coal, The Lowburners). An alliance forged from their mutual and devoted love of the golden era of country duets, the Lovers have set out to capture that classic sound and to invigorate it with new life in the form of original compositions. With one foot solidly rooted in tradition while allowing the other to two-step forward in exploration, they promise a sound as comforting as old whiskey and as compelling as that fancy new cocktail at the Sapphire Hotel.
Pete and Leslie’s many mutual friends have been surprised to learn that, although having circled each other for years in the roots music scene, they hadn’t officially met until early Summer 2014 under the dim lights of Portland’s favorite honky tonk, the Landmark Saloon. It didn’t take long to get going. Within a few days Pete was sitting in with Leslie’s side project, the Lowburners, and Leslie was jumping up on the mic at Pete’s solo, duo, and Portland Playboys gigs. A week-long river retreat solidified intentions, expanded repertoire, and got the wheels spinning for a new project. A month later, a debut was made and the duo is off and running, leaving happy memories and a cloud of dust, so thankful to have found their voices together.
Some uncanny and yet auspicious stars have aligned for the Lovers right from the get-go: the first meeting produced a literal Ring of Fire (you can ask us about that); the first $100 in the band fund came from a winning lottery ticket in the tip jar, and the first-ever gig turned out to be a surprise appearance at Portland’s beloved Pickathon! At this rate, expect no less from the Earnest Lovers than full-speed-ahead. Debut EP is slated for early 2015, and they plan to hit the road the following spring. Performing as a duo, trio, or full 6-piece band, keep an eye out for a bright Lovers star shooting across the western sky.