This show is installed in the Art Trailer Gallery, a vintage travel trailer, at The Sou’wester Lodge. Free and open to the public. 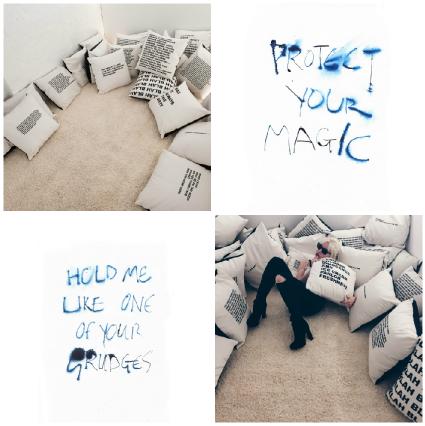 Artist Statement:
My work revolves around drawing, specifically making marks with the body. It’s about the process and physicality involved in embroidering marks to make a statement that vacillates between the poles of vulgar, violent, gorgeous. The texts come from personal musings, found internet memes and aphorisms, fragments of forgotten poetry, or the banal, pithy, heartbroken musings of cultural icons and the unknown alike.

The practice of my drawing is largely intuitive and physically demanding. In drawings up to 30 feet long, text melts into a vibrating, hallucinatory design sourced from a 1885 French wallpaper sample, which harkens to Charlotte Perkins Gilman’s “The Yellow Wallpaper.” In creating them I invoke a similar physicality to the story’s protagonist, often on my hands and knees for hours and weeks at a time, using a 0.5 mm mechanical pencil to make marks. Drawings are smudged, worn and covered with fingerprints. Many drawings comprise a palimpsest of sketches where masked figures, erased words, or traces of knotted and tangled fabric bleed through.

In installations like “Pillow Talk”, fragments of text gleaned from found sources or original writings literally pile up in soft heaps offering immersive, intimate exploration by visitors who are invited to physically embed themselves amongst the murmurings of forgotten poets and others. 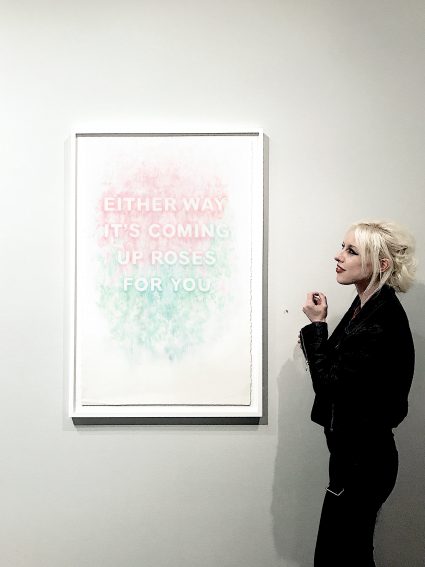 Artist Biography:
I am a self-taught artist and the daughter of a Charismatic Christian minister who grew up in rural Kansas and Texas before moving to Seattle in my early 20’s. I see my work as a task of both consciously and subliminally sorting out the experience of a female trying to make expressive marks—a task that has found uncanny resonance for me with the history of female hysteria. I am fascinated by history, art, the politics surrounding the female body, and by art that borders on obsessive, meditative devotion. I sometimes have a dirty sense of humor. Manitach’s work has been exhibited at venues including Tacoma Art Museum, Frye Art Museum, Bellevue Arts Museum, Winston Wächter Gallery, Bryan Ohno Gallery, Roq la Rue and Lawrimore Project. She is represented by Winston Wächter Gallery. From 2012-2015 she served as curator of Hedreen Gallery at Seattle University. She co-founded and co-directed multiple mixed-use arts spaces in Seattle’s Capitol Hill neighborhood, including TMRW Party (2014) and The Factory (2015-16). She holds a BA in Literature (2001) from Oral Roberts University, Tulsa, OK. Her work is included in the permanent collection of Tacoma Art Museum.

The Art Trailer Gallery lives in a 1960’s Aloha made in Aloha, Oregon! It was rescued from a neglected RV park in the northern part of the Long Beach Peninsula. After lots of TLC, it has transformed into a bright and beautiful open space to reflect a traditional gallery. It is now part of the Artist Residency Program and our non-profit organization, Sou’wester Arts.