This show is going to be live-streamed from out outdoor stage. Check our IG feed! It is no longer a performance that is open to the public. It may be audible to folks staying here.

It’s not as if Tommy disrespects genre lines. It’s as if he doesn’t know (or care) that they exist. They’re not pertinent to his survival. He’s a cross between poet, arena rocker, and dive bar star. His voice plunges deeply, then rises high, and the band follows him faithfully through tempo changes, and wall of sound string movements, adding electric guitar and in-pocket backbeat to his work.

Making it as a musician today can require a heavy helping of DIY spirit, and Tommy Alexander has that in spades. It carried the California born musician all the way to Burlington, Vermont, where he founded Jenke Arts, a nonprofit artists’ collective and record label, and eventually all the way back west, where he found a new artistic home (at least for the moment) in Portland, Oregon. Once in Portland, Alexander connected with producer Mike Coykendall, who has worked with a slew of indie darlings, including M. Ward, She and Him Bright Eyes and Blitzen Trapper. Alexander’s creates a unique, infectious indie rock style all his own. His honest and heartfelt lyricism come to life in his songs which will strike a chord with you the very first listen.

“Thought provoking music in an age of glib imitation.”
No Depression

“Kassi Valazza has a viscous, light gold voice. It swirls around in your head like whiskey in a snifter; vaporous, and intoxicating. For most of Dear Dead Days pedal steel and electric guitar lope along at half time, the in pocket rhythm section booming from deep in the low end. Its frequencies penetrate your flesh. The songs reverberate off your bones. Her lyrics drip down the inside of your skull. Kassi will be your peyote coyote; a guide through these psychedelic vistas. Here she’s found a way to trap the world of cheaters, drifters, lovers and leavers in amber. Wander from your own woes, and come walk with Valazza’s.” -Sean Jewell American Standard Time

Taylor Kingman makes music that resets the clocks. You know the feeling of standing beneath a trestle on a hard day, a can of cheap beer, flicking a lighter and dreaming up wild ideas until a heavy train comes thundering overhead and you scream and scream until your voice gives out and you feel lighter? That’s the thing that lives deep in Taylor’s songs. There’s something so rubbed-raw honest and drunken-truth about them. You can’t help but be transfixed and transformed.

Born in Portland, OR and raised in Marion County, Taylor picked up a guitar and started writing at 12. In high school, he formed The Hill Dogs, a raucous, powerful band that hit hard beneath his explosive lyrics. After graduating, he wrote like a madman, played out heavily with the band, and taught guitar on the side.

In 2015, Taylor packed up and headed to Portland where he played anywhere and everywhere with The Hill Dogs until he blew out his voice and had to halt the band. The restrictions of his healing vocal chords gave way to a deluge of new writing. Taylor joined multiple projects around the city with some of Portland’s finest and recorded his debut solo album Wannabe at the great Mike Coykendall’s studio, due out November 17th on Mama Bird Recording Co. He recently formed ‘TK and the Holy Know Nothings’ with Lewi Longmire, Jay Cobb Anderson, Tyler Thompson, and Josh Simon as a vehicle for a growing ocean of new material.

Of writing songs, Taylor says, “Each word is a world waiting to swallow me whole. I get drunk off the pitter patter poetry of lines that root me to the cold, unforgiving ground, all at once, drowning me in the violent beautiful futility of humanity, yet, also, set fire to my eyes, sending me swirling and whirling, floating blind and thoughtless through the maze of the mind. I want the words to explode bloody in all their truth, for better or worse. Vivid images dripping with feeling bursting like lightbulbs in the back of the head.” Enough said. Train thundering. Sparks raining down.

This show is going to be live-streamed from out outdoor stage. Check our IG feed! It is no longer a performance that is open to the public. It may be audible to folks staying here. 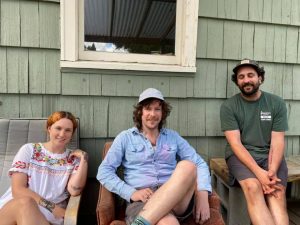