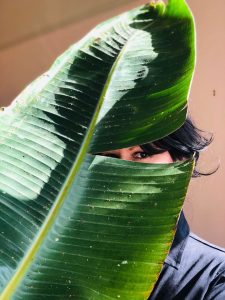 Hailing from the Sierra town of Placerville, CA, Ms. Nelson wound her way down the hills and through the valley to land in San Francisco, spending the mid-2000s finding that the middle ground between electric folk and California pop is in fact a windswept urban hilltop with her five-piece ensemble Prairiedog, who released two albums in their time together.

Since moving on under her own name in 2014, Ms. Nelson has released two full-length albums on Burger Records, Fast-Moving Clouds ​(2015) and ​Oh, Evolution​ (2017). She has also earned a MA in Creative Writing from San Francisco State University, and subsequently published​ Illuminate The Ruins​ in late 2018, a collection of poetry written throughout the previous year.

Her third with Burger, ​Weird Glow​, released June 28, 2019. It’s a new approach for Ms. Nelson, foregoing the full band of the previous two records, and approaching this body of work with just one longtime-collaborator and an engineer/producer.

The result is a record that is more sprawling sonically and lyrically. The dreams are desert dreams, the longing almost tangible, but gone are the feelings of being trapped and the need to escape that we heard in 2015’s Fast-Moving Clouds​. The riffs are heavier, the fuzz is thicker, the push/pull of a deep groove against a lilting lyric, more salient. There’s a hard-won comfort in the new record, a discovery of something that was maybe there all along but couldn’t be seen. Bright light, in ​Weird Glow​, has burned through the fog.

There is a pulsing radiance resonating from Sarah Bethe Nelson’s aptly titled third studio album, Weird Glow. You can hear it right from the first cut. “Desert Song” opens with instantly catchy electric guitar riffs – the ragged old amp distortion almost seems to be growling alongside her gauzy vocals in a beauty-and-beast contrast. There are other passages where her breathy singing recalls moments of bygone 1990s indie rock. The transcendent and catchy “Too Rich” invokes memories of the British C86 sound crosspollinated with the ethereal dream-pop of the same era. But Weird Glow is hardly an Anglophile’s affair.

Throughout this alluring album, Sarah Bethe’s native California roots vine upward and out toward the sunshine. With its subtle guitar jangle, delicately descending melodies, and romantic lyrics, the title-track taps into veins of yesteryear’s West Coast canyon-rock sound. “Sunspots” is a gorgeous and haunting standout with slowly building layers of sonic textures – it’s a bewitching and romantic dirge that begs to be placed in the love scene of a soundtrack to a cool independent film or new streaming series. If the plot of Stranger Things ever moves into the early ‘90s, this one would feel right at home.

Throughout Weird Glow, Sarah Bethe never succumbs to full blown retrospection, but manages to invite musical ghosts into her recordings for a sublime, spectral sound of warm familiarity. Van Morrison’s “Everyone” haunts “To Be Continued,” while traces of Violent Femmes’ “Gone Daddy Gone” can be heard wafting from “Paralyzed Waltz.”

Where her former recordings involved a larger ensemble, Weird Glow takes a different approach with the sole accompaniment of multi-instrumentalist and longtime bandmate Rusty Miller, making for a more cohesive listen that dodges predictability. There’s an uncanny chemistry between them. In a live setting, they play together with an extra sensory perception in their communication that sounds like they’re reading each other’s musical minds. Miller’s parts garnish Sarah Bethe’s thoughtfully crafted songs with an extra dimension not heard in the tunes of her contemporaries. With this natural confluence, the slow burning groove of “Natural Disaster” somehow manages to balance naked vulnerability with armored confidence, all the while being catchy enough to put on a make-out playlist. She bookends Weird Glow with a smoldering epic – “8th and Hooper” plays for nearly nine minutes, taking the listener on a journey that stretches and winds through the sonic topographies of her musical soul. Vestiges of her former band Prairiedog surface here, laced with lovely guitar leads that dare to braid Ennio Morricone’s classic spaghetti western soundtracks with Galaxie 500’s hypnotic mantras of timeless guitar tones.

This event is free, all ages, and open to the public!
Drinks are served in our Library Bar, open every Saturday night for shows.