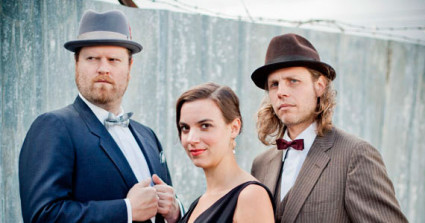 The Alialujah Choir will be performing at the Sou’wester Lodge on July 27th during the first ever all Spartan Rally. They will perform at 8 p.m. on Saturday evening.

The Alialujah Choir consists of a rotating collection of collaborators including the Portland Cello Project, but it’s core is the trio of Adam Shearer and Alia Farah of Wienland, and Adam Selzer (Norfolk & Western) founder of the famed Type Foundry Recording Studio in Portland. The group was founded after coming together to create a song for OPB’s Live Wire! Radio Show’s  “Dearly Departed” benefit album, the band has gone on to record its debut album released by Jealous Butcher Records and garner international awards for the video and song , ‘A House, A Home’, directed by Mark Smith.

The group has appeared on VH1, MTV Canada, & Indie Wire. Its unique sound has been praised far and wide. NPR said, “You’ll notice the sparse nature of the arrangements, which purposely throw the trio’s harmonies into the spotlight.”  Willamette Week wrote, “Alialujah Choir has got the full package: With these talents it’s no surprise the songs are melodically engaging (nor that they are brilliantly produced in Selzer’s capable hands), but the excellent lyricism is a bit surprising”.  Willamette Week also called them, “the best possible kind of supergroup”, and added “This is one of the prettiest albums to come out of Portland”.

The Alialujah Choir is well known for its sparse instrumentalism and harmonized vocals. They have remained committed  “to escaping the commercial pressures of their other bands and return to their love for roots folk music” thus staying true to the art and craft of music making, and have maintained a recording process whereby “no one else could play on the album, or even be present in the studio while the tape was rolling”. This has lead to an equally sparse live show schedule. The Sou’Wester Lodge is lucky to host a band of such high caliber and such rare performances, as they have performed only ten times in three years.  Their music is a bit of a throwback to the sound made famous by the 4AD label in the 1980s and 90s, but with a distinctly Northwest twist.

This first annual “Spartan Only Rally” is first time ever that Spartan trailer owners have held a rally of exclusively the trailers produced by the Spartan Aircraft Company from 1946 until 1960. Also at the rally, will be guest lecturer Shirley Wallace who as a child traveled in an early Spartan Trailer, and even helped her father remodel the trailer, including adding a second floor to the structure.

Organizers of the Spartan Rally are even trying to bring the first Spartan to ever roll off the assembly line “The Silver Queen” to this event, the owners of that trailer are holding a fundraiser to cover the transport expense, and welcome donations of all sizes at: http://www.gofundme.com/31kcyk.

The Spartan Rally is open to the public during the day on July 26 noon to 4pm. Visitors are welcome to come see these amazing vintage trailers up close. Lectures are always free & open to all at The Sou’Wester Lodge in Seaview, Washington. Performers do accept donations and will have CDs and other merchandise available for sale.

• For times and activities, or to reserve a room or a trailer at The Sou’Wester: