Join us in Welcoming Invisible Familiars opening for Jolie Holland.

Over the span of her career, Jolie Holland has knotted together a century of American song—jazz, blues, soul, rock and roll—into some stew that is impossible to categorize with any conventional critical terminology. “Jolie Holland flows back and forth and in and out of genres like water trickling in a stream, from pedal steel cowgirl to smoky jazz diva, from soul and gospel devotee to indie chanteuse, all within the parameters of what we think of as the singer/songwriter tradition. She has a sensuous voice, marbled with a richness that’s utterly satisfying.” ~from Editors’ Notes – iTunes 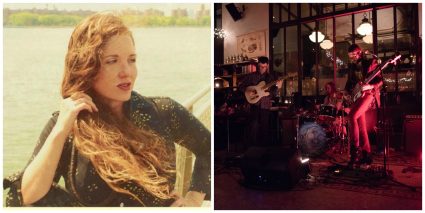 “Invisible Familiars’ debut album, Disturbing Wildlife, is out now! The band signed to Other Music this past spring, releasing the 7” single “Clever Devil” b/w “Digger’s Invitation” in June. Stereogum called it, “T. Rex in a funhouse of horrors,” advising, “Let it cast a spell on you.” Invisible Familiars is led by Jared Samuel, a New York City-based songwriter and multi-instrumentalist who has long made his living playing music and supporting a variety of NYC artists – from Sharon Jones to Martha Wainwright, and most recently, Cibo Matto and the Ghost of a Saber Tooth Tiger.” ~www.othermusicrecordingco.com