The songs immerse the singers as their voices entwine with one another and then expand. Sparse arrangements create an open bed for two, three, and four part vocal harmony, while instrumentation that ranges from a guitar to an upright piano to a Theremin and a marching drum, allow Alialujah Choir to sing their stories in ethereal allure.

Alialujah Choir came about when three well-known members of Portland, Oregon’s notable music scene took time away from the comforts and constraints of their primary bands (Weinland, Norfolk & Western, M.Ward) to focus on the natural beauty they found when singing songs from their more personal artistic quivers. 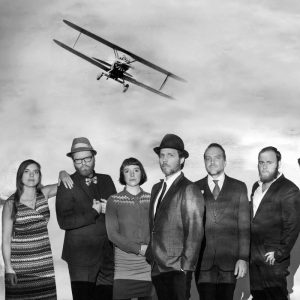 With the enlistment of a few local luminaries from Blind Pilot, Hook & Anchor and Neko Case’s band, Alialujah Choir now boasts an extended lineup that reflects the majestic sounds of the new album while preserving the intimate sensibilities the band was founded upon.

Special Hot Off The Press Note: Alialujah Choir members Adam and Alia joined M. Ward on stage and screen of The Late Show with Stephen Colbert on Feb 2nd 2016!