Barna Howard was born and raised in a quintessential Midwest town. His youth in Eureka, Missouri was pure Americana – the sort of childhood that inspired E.T.-era Spielberg – baseball cards in his bicycle spokes, flying freely down Main Street and through neighbors’ backyards. 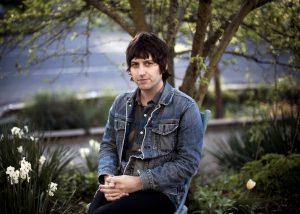 The songs on Barna Howard’s second album, Quite A Feelin’, ruminate on his relationship with home. Now entrenched in Portland, Oregon, many of the album’s tracks immortalize and reflect on the Eureka he once knew, while others focus on the relationships that define his new home out west. Small town life has long been celebrated in country and folk music, but Barna’s knack for capturing his own deeply personal nostalgia resonates in a rarely universal way.

“A delightfully intimate affair, Barna’s 2012 self-titled debut showcased an array of delicately finger picked odes to love and loss. Steeped in traditionalist folk of yesteryear, Howard’s voice and delivery echoing a young Dylan circa 1964 just before he made the leap from protest to (accidental) punk.” Rich Thane / 13 MAY 2015 – thelineofbestfit.com