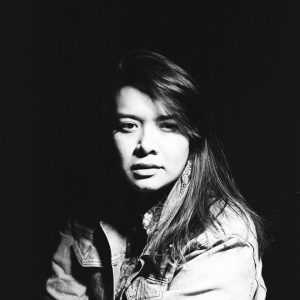 MOTHER OF MY CHILDREN
“Having this identity—radical indigenous queer feminist—keeps me going. My music and my identity come from the same foundation of being a Native woman.”

Katherine Paul is Black Belt Eagle Scout, and after releasing an EP in 2014 Paul has wrapped up the band’s first full-length. Recorded in the middle of winter near her hometown in Northwest Washington, the landscape’s eerie beauty and Paul’s
connection to it are palpable on Mother of My Children. Stemming from this place, the album traces the full spectrum of confronting buried feelings and the loss of what life was supposed to look like.
Growing up on a small Indian reservation, Paul’s family was focused on native drumming, singing, and arts. “Native American music is the foundation for all of my music,” Paul explains. With the support of her family and a handful of bootleg Hole and Nirvana VHS tapes, Paul taught herself how to play guitar. In 2007, Paul moved to Portland, OR, to attend school and get involved with the Rock ’n’ Roll Camp for
Girls. Paul has switched between guitar and drums in an assortment of projects over the last decade, citing Forest Park as a particularly strong influence on how her songwriting has grown. “It was my introduction to post-rock,” Paul recalls, “From
there, I was able to develop my own sound and style more.”
On Mother of My Children, Black Belt Eagle Scout tenderly blends post-rock with Paul’s earlier grunge influences and later, more confessional Pacific Northwest artists like Ô Paon and Mirah. The album begins with the singles “Soft Stud” and
“Indians Never Die”, and on the latter, Paul’s message is clear: “It’s a call out to colonizers and those who don’t respect the Earth; they don’t care about the water, they don’t care about how they are destroying what is around them. Indigenous
people are the protectors of this land, and others need to wake up and get on the same page.” The songs weave together to capture both the enduring and fleeting experiences of loss, frustration, and dreaming. The structures are traditional, but the
lyrics don’t adhere to any format other than what feels right in the moment. “I don’t play music to write songs,” Paul explains, “I play music to process feelings, and sometimes what comes out of that is a song.” Paired with Paul’s clear and measured
voice, each song leaves the listener feeling as if they were there when the song was written, the immediate, candid emotion tangible. Mother of My Children is a life chapter gently preserved, and the access listeners have to such vulnerability feels special and generous. We are left wanting more, and
all signs point to Black Belt Eagle Scout just getting started. The album is out on Good Cheer Records in August 2017.
—Alex Hebler
https://blackbelteaglescout.bandcamp.co