“Calvin Johnson (born November 1, 1962) is an American guitarist, vocalist, songwriter, music producer, and disc jockey born in Olympia, Washington, US.[1] Known for his uniquely deep, droning singing voice, Johnson was a founding member of the bands Cool Rays, Beat Happening, The Go Team, Dub Narcotic Sound System, and The Halo Benders. Calvin Johnson is also the founder and owner of the influential indie label K Records, and has been cited as a major player in the beginning of the modern independent music movement.[2] As a prominent figure in the Olympia music scene, he was one of the major organizers of the seminal International Pop Underground Convention.” Wikipedia 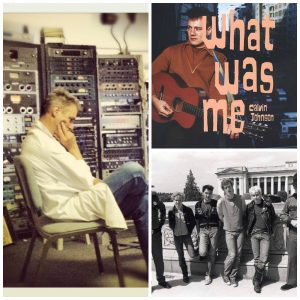 About The Young Pioneers, in a letter from Brad Sweek:

“To all our friends old and new,

The Young Pioneers- a punk rock, pop band formed in Olympia Washington in the fall of 1982 by Chris Pugh, Scott Vanderpool, Chris Gloekler and myself, Bradley Sweek, with Brian Learned replacing Mr. Gloekler in January 1983. We played extensively in the Northwest from 1982 until 1987 writing and arranging all our own material. We have remained fast friends for all these years as we pursued music projects with other bands. Scott, Chris, Bry continued to play extensively while Brad dropped out of music entirely in the early nineties.

Fast forward to 2012 when we decided to start playing again (mostly because we love and missed each others company). We picked up a new addition, Colm Meek on the synths which has been the perfect thing. Chris and I have been rather prolific writing new songs at a decent pace so with Colm’s expertise on the controls, we have be doing a lot of recording as well. Bryan Learned pilot training has taken him away to Florida for many months so we have been very lucky to have Nathan Paul filling in on bass. At this point we have decided to be a bit more public about what we are up to.

I hope you enjoy the new songs and arrangements as much as we do. We will start playing out more, posting information on our upcoming record and other fun facts here.

Selector Dub Narcotic is the pseudonym of choice for Calvin Johnson when he is re-mixing records for the Dub Narcotic Disco Plate series, or engaged in spinning records at a party or other literary functions. Drawing largely from a stack of 45 rpm phonograph records, Selector Dub Narcotic is known to mix the genres dancehall, soul, punk, garage, R&B, rock steady, bubblegum and rockabilly with assorted curiosities of the current underground music scene.