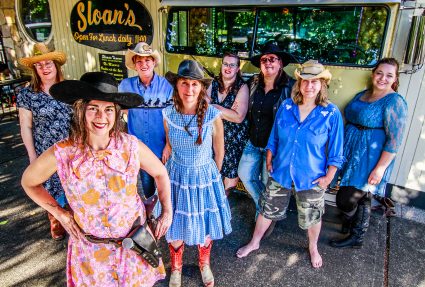 Gerle Haggard Band brings the best of Merle Haggard’s timeless music to audiences who’ve been loving songs like Mama Tried, Misery and Gin and Working Man Blues for nearly five decades, as well as introducing these and many more of Haggard’s classics to a whole new audience. This eight-piece ensemble features a terrific line-up of musicians who weave beautiful instrumentation, tight harmonies and a big heap of showmanship into a full-throttled entertainment event.
The band has recently been featured at Portland’s Rose Festival, Oregon Country Fair and The Bite of Oregon as well as performing for the women at Coffee Creek Correctional Facility. Along with their live shows this summer, the band has recently released at full-length recording chock full of their own spin on Merle Haggard classics and lesser known gems. This marks their fourth appearance at the Historic Sou’wester Lodge and the band is always excited to return to their “home on the Coast.”