“Grand Lake Islands’ sound is something like a midnight drive under the bay of country western stars.” Alt Citizen

Grand Lake Islands is led by songwriter Erik Emanuelson, a Connecticut native who moved to Portland after leaving his career as an English teacher in New York City to focus on music. Their debut LP, “Song From Far” featuring band members Bob Reynolds (drums), Joseph Anderson (bass/keys), and Evan Krogh (guitar) was recorded during Portland’s bleakest months following a sea change that occurred in Emanuelson’s life. His expressive tenor recalls Nashville Skyline era Dylan and delivers lyrics soaked with stark emotional landscapes. Recorded mostly live, the album moves from extremes of ambient texture to more traditional folk-country grooves. The songs break into wide-open brightness with sparkling guitar and swelling lap steel before being swallowed again by interludes of dark, aerial distortion. With one eye to the darkness drifting over the horizon and one eye on the light coming over the other, “Song From Far” is a snapshot of a sky in motion. 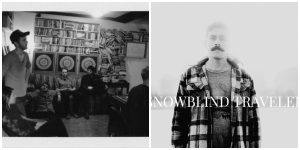 Snowblind Traveler, Long Island born songwriter Matt Dorrien, plays the song of the common man. His music is inspired by the rolling expanse of middle America, the fog and lichen draped cathedral of redwoods of the northwest, the lulling whisper of a New England blizzard, the sorely disappointed, the dearly loved, the true and honest, those who are lost and forgotten, the living, dead, and eternal. For those who have ever slept under a blanket of Big Sur stars and drank whiskey until you forgot your own name: This is for you.