Sara Jackson-Holman is a pianist/singer-songwriter based in Portland, Oregon. Emotive and deep, her style has been compared to that of Feist, Adele, and Lana Del Rey. 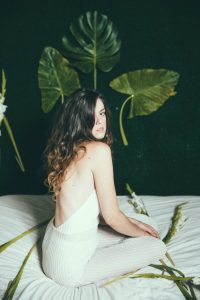 It was literally from out of the blue that Jackson-Holman was launched onto the national music scene. For the then 20 year-old Whitworth University piano and writing student from Bend, Oregon, nothing could have prepared her for the trajectory her life was about to take; propelling her from student life, to recording her first CD, to hearing her debut single “Into the Blue” (from When You Dream) close out the ABC hit show Castle in the emotional Season 2 finale, all in a matter of months.   She has since released another album (Cardiology, 2012) and EP (River Queen, 2014), and her songs been used in episodes of the television series Hemlock Grove, Grey’s Anatomy, Bones, 90210, Pretty Little Liars, Orange Is the New Black, The Fosters, Switched at Birth, and more.  Her third album, Didn’t Go To The Party, is scheduled to be released in the fall of 2016.