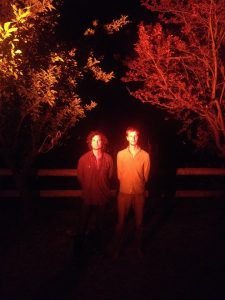 …I am going to my own hearth-stone,
Bosomed in yon green hills alone,
A secret nook in a pleasant land,
Whose groves the frolic fairies planned…

Songwriter Chris Miller, along with collaborators Mark Robertson and Weezy Ford, explore new sounds following Sleepy Volcano’s 2014 Green Hills Alone full-length release. Expanding on themes of death, epiphany and transformation, the new material draws lyrical inspiration from the Tao te Ching and eschews guitar in favor of layered keyboards and upbeat rhythms. Miller, who’s performed as Green Hills Alone since 2003, released a self-titled EP in his home town of Redding that year. He moved to Portland in 2009, and eventually recorded and released the aforementioned 2014 full-length. 2019 will begin the next chapter of Green Hills Alone with new recorded music and more tour dates.

Miller Carr released 3 full length albums in the 2000s while fronting the California band Shalants. The Shalants played shows all across the US and Europe. In 2015, Carr released, ‘Trickster in Exile,’ the first in a planned trilogy of of recorded work. This was followed in 2017 by ‘Babylon Swans,’ both available on vinyl and digital through Valerian Records. The final installment of the trilogy will be released 2019.
http://www.millercarr.com

This event is free and open to the public!!