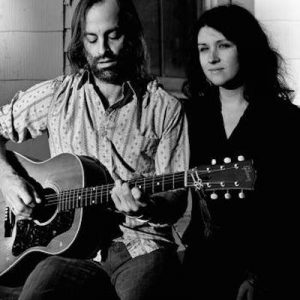 When you hear the duo Heart Hunters harmonize, you might guess that Brianna Blackbird and Drew de Man were lovers. And you’d be right. Bri’s voice solos gorgeously and blends sweetly while she plays upright bass or guitar. If Drew’s voice has something twangy about it, he comes by it naturally, having grown up in the South. They blend in richly hued harmony, wrapping themselves around songs of love and loss, spiritual yearning and social justice. These are potent tunes – picked out on old guitars and upright bass, doused with pedal steel, sparkling with harmony. They’ve opened for Birds of Chicago, Gaelynn Lea and Richard Buckner.

Brianna and Drew met while studying music therapy in Portland, Oregon. They soon began writing songs together and recording, released a couple of EPs and later, their first full-length CD in 2015, all under the name “Pretend Sweethearts.” The duo played cafes, bars, and clubs all along the West Coast and also brought their music to homeless shelters, youth detention centers, prisons and rehab facilities.

As they were falling in love, Bri and Drew lived an adventurous life on the road–sleeping on moonlit beaches, in hidden caves, shitty hotels and under ancient redwoods. Their wanderlust – and their need to find affordable housing – led them deep into South America and finally to a mountainside in Bolivia. Bri and Drew immersed themselves in songwriting and Andean culture and had their son there. Their two kids travel with Heart Hunters, touring the US and Europe.

Growing up in Georgia, Drew’s soundtrack was country, blues, string band and southern rock, but he also went to lots of Grateful Dead shows, and never shied away from punk rock. Drew’s father is a poet with a penchant for quoting ancient mystical texts around the campfire. In this case, the apple fell not far from the tree. At age ten, Drew was given his first guitar and has never stopped playing. He founded his first band, No River City, in 2001 and spent the next several years making records, touring the country and sharing stages with such artists as Iron & Wine, Calexico and Alejandro Escobedo. On the west coast, he spent some years playing in Fast Rattler with Brendan Phillips, son of the late U. Utah Phillips, to whom the band pays tribute.

Brianna Blackbird was raised in Oregon and spent many a rainy day getting lost in cassettes of Celtic folk. The daughter of a music teacher, she was raised on classic rock and Beethoven, and sang in several choirs and studying various vocal techniques, piano and guitar. Bri studied performance and social activism at Naropa College in Boulder, Colorado before moving to Brooklyn, where she began songwriting in earnest. Her songs are political, spiritual and often pretty dark, borrowing equally from Celtic, 90’s alternative and songwriters like Kate Wolf, Patty Griffin and Neil Young. She picked up the upright after learning some bass basics from Joe Stevens of Coyote Grace.

Heart Hunters is currently based in Atlanta, Georgia. They teach music, work on houses, try to show up for marches, do session work and somehow manage to raise two awesome kids. Their new record, produced by Peter Case, is to be released in 2018. They’ll pack the babies among the guitars, smudge the van and hit the road.
https://hearthunters.love/home
This event is free and open to the public