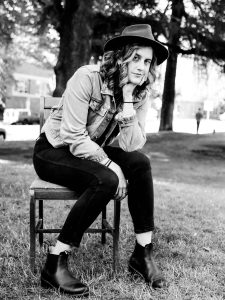 Described as a “combination of Patty Griffin grit and Amy Winehouse grace” by American Songwriter, Portland-based Soul/Americana singer-songwriter Karyn Ann has been charming audiences across the US with her powerful vocals and emotive lyricism. Her debut album Into the Depths (2015) and subsequent follow-up Be Loud (2018) garnered critical acclaim and radio play, leading this once geologist now turned-road musician to gain a steady following along the West Coast and beyond.

She’s shared stages with Haley Johnson, Liam St. John, and Fox and Bones, as well as Emily Saliers of the Indigo Girls (at the 2017 Women’s Redrock Music Festival), and has performed at the legendary Bitter End in NYC . Her work is featured in the award-winning full-length film Undeserved (2016), and most recently in the indie-short Second Story (2022), which has gone on to receive the “Gold Award for Best Acting Duo” by the Independent Shorts Awards, and ‘Best Romantic Short” by the IndieX Film Fest.

Despite the pandemic, Karyn Ann released three singles (“Who You Were”, “Don’t Practice Law”, “Probably”) in 2020, and received notable recognition for her work. She was selected for the Falcon Ridge Folk Festival Emerging Artist showcase, placed runner-up in the Red Lodge Songwriters Contest, placed TOP 100 in the singer-songwriter category of the Great American Songwriting Contest, and won second in the Bay City Arts Center Joe Wrabek Memorial Songwriting Contest. Additionally she wrote, recorded and produced an EP entitled- “I Am Not Yours” based on the works of early 20th century poet Sarah Teasdale, which debuted in March 2021. Currently, Karyn is working on new material for an indie-electric/synth rock EP titled “Consequence of Fear” slated for release in late 2022, and dropped her latest single “Wasting Time” on September 17th! Go take a listen!