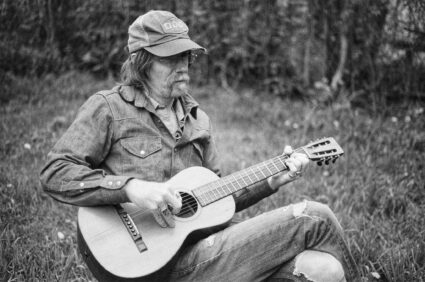 “Lewi Longmire’s preferred list of his own recordings runs 42 albums—the complete discography (from acoustic to rock to Valvoline ad spots) would choke a Nano. Regarding live shows, it’s more likely the 37-year-old Portland musician has a gig scheduled around town than not. ‘The peak of the madness was 2003,’ says the local legend. ‘I played 282 shows that year. I musta been nuts…and young. Peter Buck recently joked about my presence around town. He thought it was weird to go see a band in Portland and find I wasn’t playing in it.’

Born to a family of musicians in a Rio Grande farming community, Longmire has a famed versatility (he plays electric and upright bass, pedal and lap steel and traditional guitar, organ and piano, mandolin, drums, harmonica, banjo, trumpet, fitful violin and, as a Universal Life Church minister, has been known to marry bandmates), which led to him being called “the session musician’s session musician.” He started early, mastering instruments in school and playing whatever was needed for those few bands available. After a brief stint at the University of New Mexico, Longmire started touring a folk-punk project around the West Coast, and, a decade later, finally settled ’round Portland. He says he ‘devoted [him]self to being a hired gun in the Americana circles.’