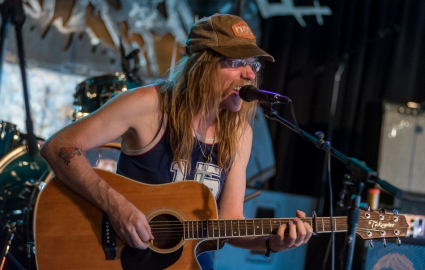 Recently, though, Lewi has taken all the things he learned from working with these fine performers and has been spending his time leading a roots rock/americana band of his own, singing his own original compositions. This group owes much to the American tradition of good songs played with high energy, deep roots, and an unpretentious sense of fun. Their sound finds the connection between the basement feel of The Band, the raspy blue-eyed soul of Joe Cocker, the desert space of Giant Sand, the “without a net” deep space improvisations of the San Francisco ballrooms, the punk abandon of The Stooges and the quiet contemplation of Neil Young playing solo.

Helping achieve this are THE LEFT COAST ROASTERS, a band of stalwart Portland musicians. Bill Rudolph (bass and vocals) played with the Crackpots and Little Sue for years, driving their home crowd into an energetic frenzy with his low tones. Ned Folkerth (drums) has toured the world over with many groups, including the midwest’s Pinetop Seven and Portland’s own Caleb Klauder Band, always laying down the perfect groove to cure whatever ails ya. Newest addition Dan Eccles (guitar) has most often been seen in the band Richmond Fontaine or backing up local rock legend Fernando.

Aside from that, Mr. Longmire can be found playing music out and about as a support player for quite a few local and national artists. Check out the Side Man page for more info on some of those projects.