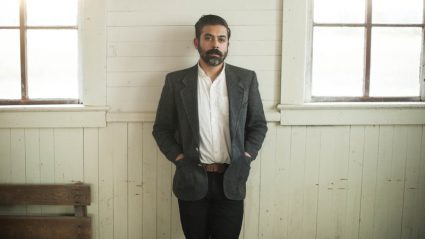 The essential elements to Matt Dorrien’s rollicking, Tin Pan Alley-inspired new record are as follows: piano, Nilsson, whiskey, heartbreak, a little more whiskey, Randy Newman, old phonographs, and New Orleans brass bands. A big, swinging pean to loneliness and the golden age of pop songwriting, In the Key of Grey is the sound of East Village piano bars long past closing, when the house musician has had a few too many, and the regulars are gathering ‘round to drown out their sorrows in song.

For all the heartache in its songs, the album was born in optimism: When Dorrien moved from San Francisco to Portland with his girlfriend, it was supposed to be the beginning of a new chapter. After two folky, ethereal, guitar-based records under the name Snowblind Traveler, Dorrien was looking forward to experimenting with writing songs on piano, the first instrument he ever learned to play. As luck would have it, his girlfriend owned a keyboard and that very practical fact, coupled with the promise of a tranquil domestic life in the beautiful Pacific Northwest, seemed like the perfect ingredients for a healthy creative life.

As is often the case, though, fate had other plans. Dorrien and his girlfriend broke up, and she soon returned to San Francisco; the breakup was amicable, and she left him the keyboard as a parting gift, thus providing, as Dorrien puts it, “both the melancholy and the medium that became the building blocks of these songs.”

Loneliness is hardly a new topic for Dorrien; it’s been present in his songwriting since his first record. “A common theme in my writing has always been loss and displacement, and that probably has a lot to do with the fact that my parents moved us around most of our childhood,” Dorrien says. “For better or worse, this sense of displacement has informed my idea of home, and has left me hopping from city to city in search of God knows what.” But rather than take the predictable route and filter that sadness into a stack of slow-moving ballads, Dorrien instead drew inspiration from songwriters like Carole King, John Lennon during his New York era, and Harry Nilsson’s acclaimed 1970 album Nilsson Sings Newman. The result is a record that swings and sways, even while its heart is breaking. “Underwear Blues” is a loping, piano-driven salute to a one-night stand, Dorrien’s limber voice somersaulting over two-stepping piano and woozy clarinet. “‘Underwear Blues’ mainly started as a piano-writing exercise,” Dorrien says. “I was trying to write something maybe Leon Russell, or Paul McCartney in the late ‘60s or early ‘70s, would’ve been into. I like the syncopation of the melody against the halftime rhythm of the chorus.” “I Can’t Remember,” the first song Dorrien wrote for the record, feels like a subtle melodic nod to “Without You,” Dorrien singing “Baby things are falling apart/ Since you went and broke my heart,” before the song glides into an airy falsetto chorus. “It’s really just a simple breakup song, but it came from a very honest place. I wanted the chorus to really convey the deep sadness I was feeling.”

If those two songs are documents of both the pain that accompanies a breakup and the fumbling, semi-comic attempts to move on, “All I Wanted to Say” goes for something more difficult: the desire to remain friends. Gently-drifting ‘70s FM rock balladry at its finest, the song is essentially a transcript of a phone conversation Dorrien had with his ex-girlfriend after they split. “I was really trying to channel Brian Wilson and Carole King with this one—a marriage of ‘God Only Knows,’ the saddest and most beautiful pop song ever written and recorded, and ‘So Far Away,’ one of my favorite Carole King tunes on Tapestry.”  “Pretty Little Thing” tips its hat toward country music, with its tale of barroom misfortune and its swinging, player-piano-style keyboard line, and “Maybe this Time” is a sauntering jazz number with a vocal line that swoops and dips. Each song is shot through with an easy, sure-handed melodic sensibility, driven by Dorrien’s graceful voice and his knack for artfully-constructed harmonies that never feel precious or overworked. Dorrien is joined on the record by bassist and lap steel player Matt Dawson (of Montreal), multi-instrumentalist Mitchell Gonzales, drummer Graeme Gibson (Fruit Bats; Michael Nau) who also recorded and engineered the record, and Ben Nugent (Delorean), who mixed it. Together, they tell the story of a man working to put his heart back together, one blue note at a time.

“I guess I would say this album is a homage to a bygone era of songwriting,” Dorrien says. “A lot of the songs are about a certain period in my life, with themes of love and loss abounding. But at its core, I believe I wrote this record as a tribute to my favorite songwriters.” With In the Key of Grey, Dorrien isn’t just paying respect to his heroes—he’s making a convincing bid to join their ranks.    – J. Edward Keyes