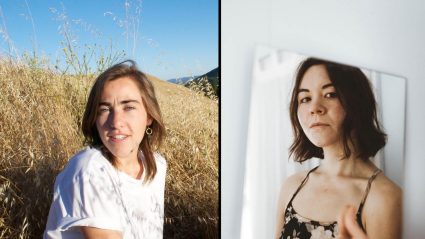 Kill Rock Stars signed the Portland band MAITA, led by Maria Maita-Keppeler, in 2019. This year has seen a massive shift for Kill Rock Stars. After a thirteen year hiatus, Slim Moon has returned to run the label he founded. The signing of MAITA is both previous label head Portia Sabin’s last act and the first initiative of Slim Moon in his second tenure as guiding light of KRS.

Of this inaugural signing, Moon offers the following statement. “Put simply, my love of MAITA and my belief in Maria’s genius pulled me back into the record business. When I quit running KRS in 2006 it was super important to me that it become 100% Portia’s baby. I never did any back seat driving and I never made any unsolicited suggestions about what artists I thought she should or shouldn’t work with. But earlier this year Portia played MAITA’s music for me and asked me what I thought. I immediately thought it was really special and suddenly found myself breaking my own 13 year old rule – “you are right Portia, you just really have to work with this band.” One thing led to another and before I knew it, we had agreed not only to sign them but that I would return to a limited role at KRS in order to be the label’s liaison with them and to shepherd the whole project. It was months later that we learned Portia would be leaving to take over as CEO of The Music Business Association and that I’d be returning as president of the label as well.”

Best Wishes balances ethereal musicality with visceral expressiveness. This juxtaposition is mirrored in the arrangements through potent use of loud and soft dynamics and in Maita-Keppeler’s lyrics, which manage to be layered, literate, but also impactfully concise.

MARGO CILKER’s got a farewell song for every place she’s lived. Margo Cilker has lived a lot of places: she “used to be Montana, wild and free,” she’s “a California dogwood, not sure where I belong,” “the worst crime [she] commits is hesitation- waitin’ on that Bilbao precipitation.” Since “finishing her studies” in Clemson, South Carolina in 2015 and releasing her debut EP Boots and Spain and Boots Again, the native Californian apprenticed herself to the songwriter’s trade in true vagabond style: move to Spain and busk all over Europe a la Ramblin’ Jack, sing a duet on a Spanish Honky-Tonk band’s recording of an Ernest Tubb classic (“Nails in my Coffin,” with Dead Bronco), front a Lucinda Williams tribute band in Bilbao, make a record in England (2017’s Field Heat EP) and tour Europe with a band of Flatt-and-Scruggs-obsessed Englishmen, then come home and milk cows on an organic farm in Petaluma – and make another record.

2018’s California Dogwood EP is Cilker weighing the cost of a life spent honing a craft and carving out a space to call home. There’s the rambling, meditative title track’s offer to “come back with me if you want to, we can start our country life – I’ve got the will and I’ve got the tractor, I wanna be your singing country wife,” and Bilbao Precipitation’s brutally honest look at the dark corners of making a life in art: “Sometimes having songs to sing feels like a torture, calling out to other poets: tell me your secrets, I’ll trade you all of my bad habits for your diseases- maybe we’ll write songs then.” Cilker writes songs that philosophize hard work, heartbreak, and wanderlust with the reverence of a country music obsessive and the sharp-eyed clarity of one who was not born into country music but had to find it (and live it) for herself. She picks an acoustic like Woody Guthrie at his most fervently righteous and sings with the control and focus of a voice that has earned its edges in dive bars and busking pitches. Cilker hasn’t slouched on stateside touring, either: she played over 100 shows in 2017, and is on track for as many in 2018 including Red Ants Pants Music Festival (MT), Offbeat Festival (NV), and Oregon Country Fair. Last we heard, Cilker was calling her native California home again and her band The Cargo Milkers was playing shows with Barna Howard, Elijah Ocean, and Caleb Caudle… But don’t expect her to stick around long. She is, after all, “an uneasy woman”.