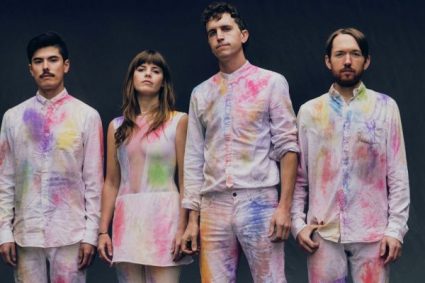 Before she died, Matt Sheehy’s mother used to tell him about a dream she had about Lost Land Lake—a place she spent part of her mid-western childhood. That dream inspired the name of the Juneau-born, Portland-based songwriter’s band, and her memory is imbued in Medallion, their second album. If DRRT, the group’s first independently released album, was about the confluence of nature and technology, Medallion, its latest, concerns dualities – experiences of love and loss, impermanence and longevity, death and rebirth.

The confrontation of these dualities resulted in a set of songs that explore “more human territory,” according to Sheehy, a professional forester who spend his days in Oregon’s immense wooded expanse – where he collects data while occasionally dodging 1,000-pound bull elks and the stray hunter’s bullet.

The coming-apart of Sheehy’s marriage engagement and nearly concurrent loss of his mother, followed closely by the blooming of a relationship with longtime friend and bandmate Sarah Fennell, heavily influenced the lyrics on Medallion.

“It was almost like a switch flipped,” Fennell says. “It took us a while to figure out what that meant.” The 80s British synth-pop influenced ““Gemini” deals very directly with the danger I felt in getting closer to Sarah,” says Sheehy, while Paul Simon-esque world folk number “Flinch” is a direct response to his mom’s passing.

Yet not all the songs are so directly autobiographical: “Feed the Fever” was based on a TV interview with NSA whistleblower Edward Snowden; the lyrics are direct quotes from the transcript. The swirling world beat psychedelia of “Trailer Tracks” was written whilst secluded in an Airstream during a writers’ retreat. The wide-screen Blue Velvet epic “Alpine Street” is a cinematic dream of suburban domesticity, cut with an undercurrent of sadness and dread. “Nothing lasts forever,” Matt observes. “And the seeds are already planted for the change that’s inevitable.”

Sheehy took the seeds of the songs into “the idea factory/workshop that is Brent Knopf’s brain,” he relates, “where he spits out all the bells and whistles that we hang on those structures.”

After the 2011 release of DRRT, Lost Lander went on tour for almost two years, playing 140 shows in the US, Canada, Europe, and Russia, where their collective experience resulted in the camaraderie and tightness that went into the making of Medallion. “For me, this band has been a dream come true” says Sheehy. The music business in general may be pessimistic, but not everyone in it is. We’re excited to go towards enthusiasm.”

Medallion is all about wrenching joy from despair, of finding the permanent within the temporary. “This record is an exclamation of love and loss,” Fennell declares. “It’s emotional, dealing with life in an exuberant way, even if it’s sad, hard, wonderful, and crazy. We’re all just lucky to be here to experience it.”