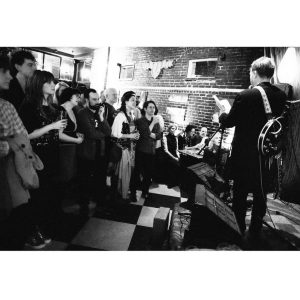 Nick Jaina is a musician and writer from Portland, Oregon and has released several albums including 2013’s Primary Perception on Fluff and Gravy Records, and 2010’s A Bird in the Opera House on Hush Records. He is a co-founder and musical director of the Satellite Ballet and Collective in New York City, and has composed music for ballets and contemporary dances, featuring dancers from the New York City Ballet and Juilliard. Ask Nick Jaina about his time spent as Artist-In-Residence at the Sou’wester, the writing 20 songs in one day project, and about his new book, Get It While You Can.