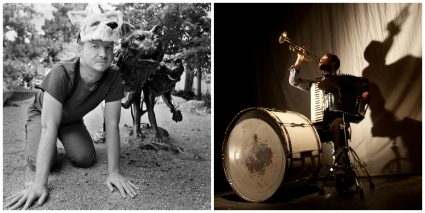 Nick Jaina is a musician and writer from Portland, Oregon. His most recent album, Primary Perception, was released in April 2013 on Fluff and Gravy Records. As the Portland Mercury said, “I’d feel embarrassed describing Nick Jaina as a genius outright, and I’m sure he’d hate that too, but it’s so tempting– because he is so clearly the real deal.” He is a co-founder and musical director of the Satellite Ballet and Collective in New York City. He has composed the music for three ballets and three contemporary dances with that group, featuring dancers from the New York City Ballet, Ten Hairy Legs, and Juilliard, performing at the Baryshnikov Center and the Joyce Theater. Their most recent performance was two sold-out shows at Brooklyn Academy of Music in May 2014. Of that show, the New York Times wrote, “[The] pure, pungent, earthy music for strings, piano, and percussion… was the most physically bracing part of the night.” He released his first book, Get It While You Can, a work of non-fiction, through Perfect Day Publishing in January 2015. It is a finalist for the 2016 Oregon Book Awards.

Lonesome Leash is the solo moniker of Los Angeles-based songwriter and multi-instrumentalist Walt McClements. Known for previous involvement in Dark Dark Dark, Hurray for the Riff Raff, and Why Are We Building Such A Big Ship?, McClements, as Lonesome Leash, channels all of his musical experiences into a lean and gorgeously messy solo affair.