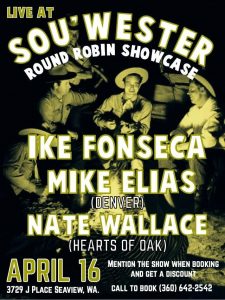 This Round Robin Showcases:

Born and raised in Portland, Oregon, Ike Fonseca has been engulfed in the Pacific Northwest music scene for almost 2 decades. With his own brand of americana mixed with folk and rock Ike has been described as “good time’n whiskey drinking music for all ages”. An upcoming 5 state tour is scheduled starting in April in support of the new album. The self titled record will be featured on vinyl with digital download.

“[SHOEGAZIN’ COUNTRY] The term “shoegazer country” is hardly the first thing that comes to mind when talking niche music genres, but it remains an apt description of the warped soundscapes and distorted tremblings underlying Hearts of Oaks’ latest LP, New England. Though much of the record teems with the countrified familiarity introduced in quaint opener “Used to It Now”—from the gentle fingerpicking and delectable pedal steel to frontman Nate Wallace’s Dylan-like delivery and apparent relationship struggles—later tracks bludgeon you with heavier elements.” – Brandon Widder-Willamette Week

The band Denver: Paste praised their 2012 self-titled debut’s “perfect tunes,” while KEXP hosted a live session and proclaimed, “sweet harmonies and tight arrangements abound.” Statements like these become all the more relevant with their upcoming release, Rowdy Love, as Denver teamed up with Earley and Adam Selzer (M. Ward, Norfolk & Western) for their first trip to a proper studio. Recorded live in just two days at Selzer’s Type Foundry Studio, Rowdy Love certainly showcases all the endless chops at Denver’s disposal.