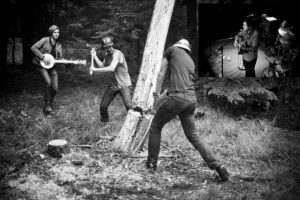 Paste praised their 2012 self-titled debut’s “perfect tunes,” while KEXP hosted a live session and proclaimed, “sweet harmonies and tight arrangements abound.” Statements like these become all the more relevant with their upcoming release, Rowdy Love, as Denver teamed up with Earley and Adam Selzer (M. Ward, Norfolk & Western) for their first trip to a proper studio. Recorded live in just two days at Selzer’s Type Foundry Studio, Rowdy Love certainly showcases all the endless chops at Denver’s disposal.

The record’s true focus, however, lies in the rare way Olsen, Elias and Bevitori’s distinct voices co-exist. There’s a natural melding of styles that’s evolved from afternoons on Olsen’s back porch, late night’s around Elias’ fire pit, and every last time they’ve nailed “The Weight” harmonies at the old Triple Nickel. Denver’s three songwriters may come to the process with varying style and influences, but Denver’s songwriting is universally honest and bare, whiskey-fueled, sweat-soaked, and steeped in working class life. Some might call it country. Some might call it rock. Some might call it a few drunks on a stage. Either way, bullshit and irony have no home here.

Rowdy Love will be released on July 15th, via Mama Bird Recording Co.

Kele Goodwin has spent his life in three places: in Juneau, Alaska; on the Navajo Nation; and in the misty Pacific Northwest. He makes music that sings from bone marrow, from a life and landscape alternately charted and lost, crushed and rebuilt. It is music made familiar by the experience of pain and its lessons. It is music to live by.
Goodwin’s debut album Hymns was produced by Sean Ogilvie of Musé Méchanique and features guest performances from Laura Gibson, Alela Diane, Ogilvie himself, Douglas Jenkins of The Portland Cello Project, and many others. His lyrics are both observation and prayer, delicate lines built on an architecture of gratitude and disbelief of the world around him.