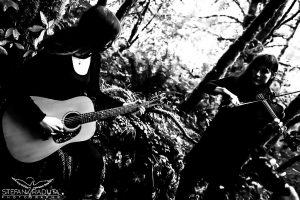 Vradiazei, plays dark, metal influenced folk music on acoustic instruments. “The realization that the darkest days are yet to come inspired us to abandon the use of electricity in our music. We express the anguish of the past, the desperation of the present, and the uncertainty of the future without it. When the world is left in ruin our sound will echo in the empty streets.”

***
Born in an attic “cabin” studio lined with Douglas Fir, The Cabin Project began as a solo act project started by Katie Sawicki, a former-folksinger from Brooklyn who became inspired by electric guitars, keys, synthesizers, and balancing all three onstage. After moving to the Pacific Northwest in 2008, Sawicki sought out sound rooted in the intimacy of folk, and the arrangements of orchestral rock. While she typically collaborates with her full-time band of percussion, strings, and bass, the solo Cabin Project builds this community of influences and collaborations and cultivates a sound that chimes earnest, reverent, and full of warmth. Her most recent record, released with the Cabin Project, Unfolded, is self-described as, “an album about despair, loss, hope, freedom, heartache, justice and love.”