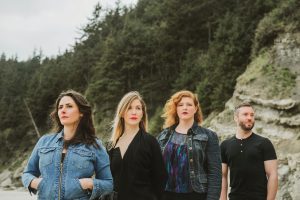 “Lenore., a project that skirts the edges of folk and pop to create a sound that is earthy and melodic, toned and precise.”

“a band deeply committed to strong and timeless songwriting, calling upon the husky vibes of Fleetwood Mac, the intimate wonders of Simon & Garfunkel or the ethereal bliss of Enya, all wrapped around the majestic scenery of the Pacific Northwest.”

“When they sing you’re transported to a different dimension, an unearthly realm. Here, you’ll find safety and security. Here, you’ll be able to rest, to find peace. And here, you’ll discover the courage you need to start living the life you want.”

The coming together of Joy Pearson and Rebecca Marie Miller as Portland’s newest folk outfit, Lenore, is serendipitous, to say the least. After individually hitting rock bottom — Pearson following her divorce and Miller after a period of destitution in LA — the pair separately turned to songwriting in the search for a still point in their turning worlds.

After several years of lending their abilities to other projects, including Saddle Creek’s The Mynabirds, and Portland’s own The High Water Jazz Band, they finally found themselves spinning on the same axis when a chance meeting through a mutual friend, Pokey LaFarge, sparked an immediate connection. A drunken night ensued, and before they’d even scoped each other’s material, they had committed.

Now, just under two years since that fateful night, and Lenore can boast having performed at legendary Pacific Northwest venues including Mississippi Studios, Aladdin Theater, and Doug Fir Lounge in Portland, as well as the Sunset Tavern, Triple Door, and Tractor Tavern in Seattle. They’ve opened for the likes of Eric Bachmann, Laura Gibson, Esmé Patterson, and ex-collaborators, The Mynabirds, and have shared the stage with Peter Buck (R.E.M.), as well as Chris Funk and Jenny Conlee (The Decemberists).

Since Lenore’s formation, Miller and Pearson have gained full-time collaborators in seasoned Portland musicians Edward Cameron (classical guitar) and Jessie Dettwiler (cello), who have contributed significantly to the evolution of Lenore’s sound — a melancholic blend of harmony-driven folk with an ever present silver lining.