JENNY DON’T AND THE SPURS have been making their own brand of roots country music since early 2012. The core members of the group, Jenny Don’t (DON’T), Sam Henry (WIPERS, NAPALM BEACH, DON’T), and Kelly Halliburton (PIERCED ARROWS, P.R.O.B.L.E.M.S.) all bring something from their own extensive and long musical backgrounds to the table to create the rich musical tableau that comprises JENNY DON’T AND THE SPURS. 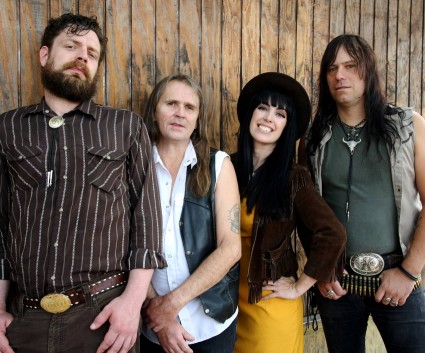 Following in the wake of their two vinyl singles, their debut self-titled album continues in the tradition of the band’s signature sound, evoking the spirit of lonely desert roads, longing hearts, and star-filled skies over sweeping Western landscapes. While the sound of the Spurs is original and draws from deep wells of personal experience, the band pays stylistic homage to the greats of the genre – Patsy Cline, Ernest Tubb, Hank Williams Sr., Loretta Lynne, and all the rest of the real players from the 1940’s and 50’s…an era where the lines between Rock n’ Roll and Country were blurred, where the likes of Elvis Presley, Johnny Cash, and Carl Perkins could tour together and nobody would bat an eye.