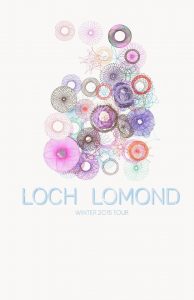 Help kick off 2015 and Loch Lamond’s tour with the Vaselines from the cozy confines of our fine lodge.

Ritchie Young, whose played solo at the Sou’wester, returns with a full band.

“A music collective from Portland, Oregon, Loch Lomond began life in 2003 as the solo project of Ritchie Young. Admittedly, most solo projects don’t involve a carousel of contributions from upwards of 30 musicians, but that’s an indication of just how amorphous Loch Lomond’s line-up was until 2007 (when their second album, Paper The Walls, was released). Having coalesced into a more settled, six-piece incarnation, Loch Lomond finished recording ‘Little Me Will Start A Storm’ back in 2008 before the material was temporarily shelved due to mixing issues and the small matter of a sell-out US tour with fellow Portlanders ‘The Decemberists’.

Armed with the heightened profile gained by the Danny MacAskill piece (the band met Chemikal Underground while in Edinburgh promoting the film for Red Bull), Loch Lomond are now set to release ‘Little Me Will Start A Storm’ in the UK, Europe and the Far East. Augmented by two additional tracks not present on the original US version (‘Tic’ and ‘Made of Ink’), ‘Little Me Will Start A Storm’ was a beguilingly subtle piece of work, showcasing not only the writing talents of predominantly Ritchie Young, but the assured arrangements of a tremendously gifted group of musicians.

The album was followed nearly six months later in March 2012 by the ‘White Dresses EP’, showcasing a slightly darker, more sombre side to the band, the EP would be the precursor for their next album proper ‘Dresses’ which was released in April of 2013.

‘Dresses’, and it’s a spectacular, moving piece of work. Employing piano, cello, flugelhorn, vibraphone, dulcimer, banjo, belle plates and, perhaps most affectingly of all, some dazzling choral arrangements,‘Dresses’ can be remarkably understated for an album flushed with so many orchestral characteristics.

Loch Lomond recently completed an extensive European tour and plans are afoot for some European summer festivals and dates. Keep an eye out for them as if you are lucky enough to catch them live then you will not be disappointed!”