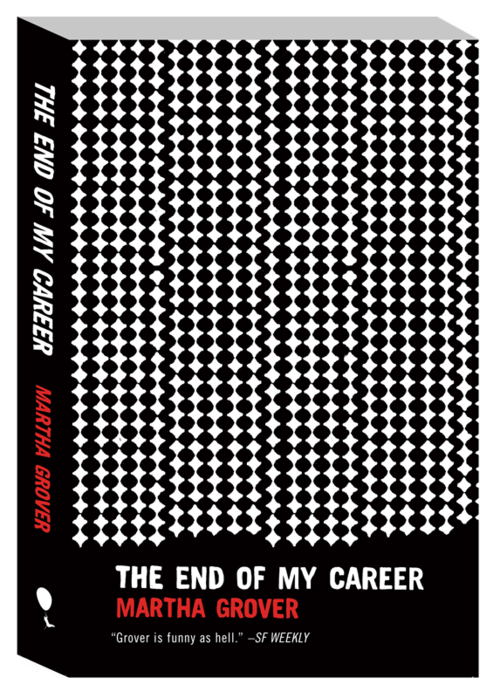 AS SOON AS Martha Grover opened her new book, The End of My Career, with a story about cleaning, I knew we were on the same page. People make fun of me for liking David Sedaris, but at least he understands how to clean a hardwood floor. Grover does too, as a seasoned custodian. “Cleaning Jack’s House” breaks open an observational mystery about the home of a “total bachelor slob.” She finds the “truly messy” home breathtaking: “A thing of wonder,” she writes fondly, “you so rarely see it. Messy people don’t host dinner parties.”

The first short story in a collection is always a clue about what’s coming next. In this case, Grover sets herself up as the non-judgmental observer of a client who, she gradually begins to discover, is not messy out of laziness but an illness from which he is recovering. This echoes Grover’s own situation—she has idiopathic Cushing’s disease.

Grover’s collection, available now from Portland’s Perfect Day Publishing, continues with “The Truth About Pheromones,” bringing the book’s situation more sharply into perspective. We’re dropped into her dating life as she hooks up repeatedly with someone she isn’t attracted to—all the while wondering why she’s doing it. Grover is suddenly no longer the benevolent observer. Here is her own laundry: some of it dirty, some of it utilitarian, all of it very necessary and human. We are the custodians now, and Grover seems to ask us to regard her with the same impartiality she showed her first chapter’s slob.

Grover’s dating trials will resonate with many. Some are dark. At the end of “The Five Stages,” Grover casually mentions her IUD to her date to explain why she doesn’t have a period. “He looked like he wanted me to stop explaining,” she writes. “As if he didn’t want to be reminded that I had a body.” These short sentences were shocking for their succinct honesty and apt description. I think we’ve all been on the receiving end of that sentiment, naked or otherwise.

I’m surprised Grover—who frequently brings up drawing and whose illustrations appear throughout End of My Career—hasn’t illustrated it.

Many of the book’s chapters have appeared in Grover’s ongoing zine Somnambulist, which just recently celebrated its 27th issue in July at the 2016 Portland Zine Symposium. In 2011, eight years’ worth of Somnambulist were collected in Grover’s first book, One More for the People, also released by Perfect Day, which described the everyday grimness of her illness. “In medicine, when they can’t come up with a cause for a disease, they call it idiopathic,” she notes. But in The End of My Career, Grover is recovering, or is perhaps as recovered as she can be for now. She tests out her newly regained strength, trying to take on jobs and wondering if she can ever move out of her parents’ home again.

I don’t have much in common with Grover, but her easy prose makes me feel as if I do. In my mind, she’s exactly where every Portlander is right now. She is coping with an illness. She has strained but important relationships with her family. She tries out different jobs, willing to be versatile, to try everything, to survive. She works as a private investigator and later as a real estate agent. It’s somewhat humbling that—despite growing up in Corbett and the Montavilla neighborhood—Grover still views herself as an interloper. Martha Grover isn’t an outsider. Or maybe she is—but only in the way that in Portland, we all are.