Skip to content
Calendar
Add to Calendar
When:
Sun, January 17 @ 8:00 pm
2016-01-17T20:00:00-08:00
2016-01-17T20:30:00-08:00
Nick Jaina is a musician and writer from Portland, Oregon. His most recent album, Primary Perception, was released in April 2013 on Fluff and Gravy Records. As the Portland Mercury said, “I’d feel embarrassed describing Nick Jaina as a genius outright, and I’m sure he’d hate that too, but it’s so tempting– because he is so clearly the real deal.” He is a co-founder and musical director of the Satellite Ballet and Collective in New York City. He has composed the music for three ballets and three contemporary dances with that group, featuring dancers from the New York City Ballet, Ten Hairy Legs, and Juilliard, performing at the Baryshnikov Center and the Joyce Theater. Their most recent performance was two sold-out shows at Brooklyn Academy of Music in May 2014. Of that show, the New York Times wrote, “[The] pure, pungent, earthy music for strings, piano, and percussion… was the most physically bracing part of the night.” He released his first book, Get It While You Can, a work of non-fiction, through Perfect Day Publishing in January 2015. 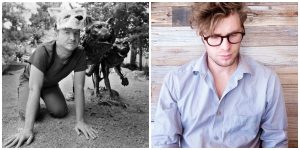 Stelth Ulvang breathes life into ordinary things ­ a tattered, grey bowler hat made light as feather and nimble as a hummingbird when it’s an extension of Stelth’s palm and a piece of knotted wood sings as a new slingshot once Stelth’s pocket knife has touched the bark.Stelth is a creator; self­taught and continually curious to learn more, he’s a talented multi­instrumentalist, spirited poet and composer of vulnerable, honest, and rich music. Able to balance heavy truths with the lightness of humor and observation, his songs share the wayfaring nature of his heart. His unique ability to transform living rooms, basements, backyards, kitchens, and even large venues into an intimate moment of storytelling, makes his carnival­style performance and confessional lyrics appealing to the human experience. Full­time globe traveler, currently touring with The Lumineers, Stelth first kicked off his musical travels co­founding the band known as The Dovekins.