On Wednesday December 30th The Sou’wester will host a rare public screening of Sometimes a Great Notion. The movie, adapted from Ken Kesey’s epic novel about a defiant family of loggers, starred Paul Newman and was filmed on the Central Oregon Coast during the summer of 1970. The film was released in 1971 to an indifferent nationwide audience but remains a cult classic in the Pacific Northwest. 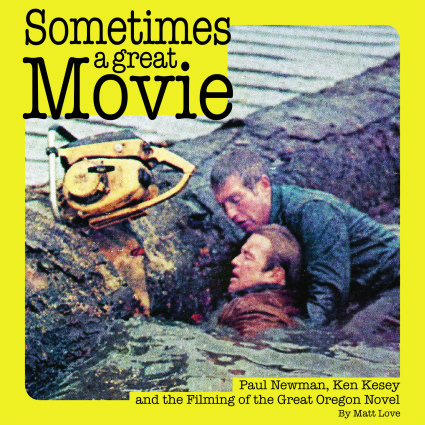 Astoria writer Matt Love, author of Sometimes a Great Movie: Paul Newman, Ken Kesey and the Filming of the Great Oregon Novel, will introduce the movie and take questions after the screening. He will also discuss new revelations about the legend of whether Newman cut the legs off a tavern pool table with a chainsaw during the production.

The screening will also feature home movie footage of the production.

Matt Love lives in Astoria on the Oregon Coast and is the publisher of Nestucca Spit Press. He’s the author/editor of 14 books about Oregon. In 2009, Love won the Oregon Literary Arts’ Stewart H. Holbrook Literary Legacy Award for his contributions to Oregon history and literature. His latest books are A Nice Piece of Astoria: A Narrative Guide and his debut novel, The Great Birthright. His website is www.nestuccaspitpress.com

In June 1970, the biggest movie star in the world traveled to the Oregon Coast to film an epic novel about a defiant family of loggers written by a home grown counterculture hero. The star was Paul Newman. The author was Ken Kesey. The story was Sometimes a Great Notion and it has a fanatical following in the Pacific Northwest.

What ensued was a wild working vacation between Hollywood and Oregonians involving beer, sex, scotch, loggers, beaches, and perhaps, a spectacularly vandalized pool table. In Sometimes a Great Movie: Paul Newman, Ken Kesey and the Filming of the Great Oregon Novel, author Matt Love documents the legend of that magical summer and presents over a 125 never-before-seen photographs, including many in color.

“I first became interested in the story after Ken Kesey died in 2001, when I heard a remarkable tale from an eyewitness who claimed that during the movie shoot, Paul Newman cut the legs off a pool table with a chain saw in a Toledo bar,” said Love. “I wanted to discover if the story was true. In the course of four years, I interviewed close to a hundred people connected to the filming and collected hundreds of incredibly candid photographs. I think I’ve ended up with a truly fun and poignant narrative about a unprecedented earthy collaboration between Hollywood and a place where they went on location to make a movie.”