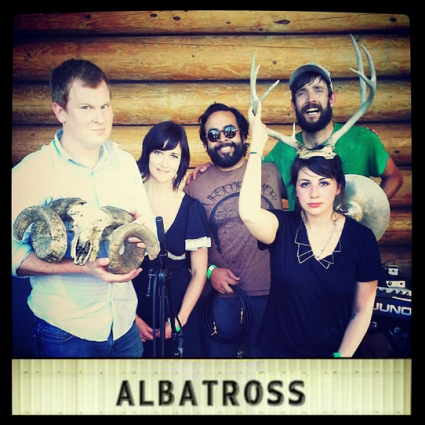 In the winter of 2011, Ryan was asked to write the score for a musical adaptation of Woyzeck by Georg Büchner. He incorporated the talent of Joel Andrew, Cristina Cano, Amanda Lawrence, and Paul Seeley to musically paint the haunting story of a man driven to madness. The group decided they were too in love to leave each other after the play was over.
From then on, they were Albatross. Now here are some lies about each of them:
The play had a cowboy theme so he naturally brought on his old shooting partner Paul, to shoot guns at drums so they make that cool ricochet sound (pwing!).

Cristina was interning at Jurassic Park until it shut down, with a focus on velociraptor calls, she barely made it out alive. She was initially brought in as a consultant for the band but human-made velociraptor calls are dazzling so she stepped up to piano and vocals.

Amanda was on the trail with Apache Ghost Warriors as the band’s leader. Responding to a craigslist ad for a different kind of band leader she was surprised to find music much more rewarding and less gruesome. She’s currently happy she made the switch but true warriors never change so she plays viola to sooth her own beastly heart.

Joel plays bass and together they played a benefit show to help the play make some extra cash. About halfway through the second practice for the show Ryan said, “OK, ok, OK! Fine! Let’s just make it a band.